The Titanic of Gay Rights, leaving all in its wake, is about to founder on a large and immovable fact....
The iceberg of clinical fact looming up in the dark is this: that homosexuals who want to become heterosexual can and do change, as authoritative medical research has now demonstrated. Given the will, and skilled therapy, there can be an end to the nightmare of same-sex attraction. That is the best news for our heartsick friends down below deck, but it is bad news for the complacent triumphalists of the Gay Titanic....
As to the exact causes of homosexuality, the medical jury is still out. But the baseless claim, promoted by [Australian] Justice Michael Kirby and others, that gays are just born that way, is given no support by the American Psychiatric Association. Their Fact Sheet on Sexual Orientation (2000) sums it up: "There are no replicated scientific studies supporting any specific biological etiology for homosexuality"....

[US] Domestic Homicide of Male Spouses by Females: A Review for Death Investigators

Women in intimate relationships are frequently portrayed by modern society as “the victim” when violence or a homicide occurs in intimate partnerships. These women continue to be seen by American culture as weak individuals who suffer at the hands of domineering, powerful, over-controlling men. The myth that spousal murder is committed almost entirely by husbands who kill their wives must be dispelled. In addition, there are discrepancies within the legal system, where a female is treated more leniently for murdering her husband, than when a man murders his wife. The criminal-justice system has failed to see equality in the crimes in the sexes, allowing for biased views that women are less malevolent than men and more prone to victimization. The stigma is intractable that women are more likely than men to feel remorse for what they’ve done. While this may be true for some women; for others, the truth is much farther away than many suspect.
[Full story]

Dialogue between a feminist and a man — revisited

This checklist (PDF file — 65kB) can help you decide what to do in Canada’s next federal election. The document contains additional information about the Christian Heritage Party of Canada—part of a world-wide movement to restore Biblical principles and morality in government.

MSP: The Male Sacrificial Premium
Of being a POW in Iraq

Article, by Rahul Mahajan, and photos (Based on 60 Minutes II broadcast — you've got to see the photos to believe what is being done; it is awful, inexcusable!  Right now the prisoners are being taught by Americans to hate all things American.  What will these prisoners do once they are released?  It is estimated that there are between 10,000 to 20,000 of them in Iraq; and anyone, especially men, can become a prisoner for any and no reason at all.

See also The Male Sacrificial Premium for a discussion of the fundamental issues. 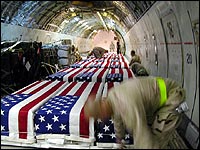 ZPA/ZUMA PRESS
The flag-draped coffins of 21 soldiers killed in Iraq are carefully strapped down and checked before being returned to the United States aboard a military transport plane.

The irony, of course, is that the about 700 US soldiers that lost their lives so far in that war is not news, but that when a woman photographer loses her job on account of reporting on that calamity, that makes the headlines.  We are not even allowed to know that men are being made to die, but we are made to feel sorry for a woman losing her job for telling the truth.  That is part of the price of The Male Sacrificial Premium.

For more than 100 years the Indian Act has segregated Indians from Canadian society. By targeting one segment of Canadian society, the Act isolates Indians from other Canadian citizens by placing them on reserves; thus the system limits their ability to fully participate in the economy.

Why does the federal government not put an end to this system which clearly has little or no accountability? In a bizarre twist of fate, the "Indian Industry" needs the reserve system – with all its faults – to justify its existence.

The "Indian Industry" is composed of a multitude of consultants, program analysts, researchers, administrators and managers who swell the ranks of the bureaucracy. In addition, Indian lobby groups are funded by the federal government to lobby for more money and special rights for Indian communities. These are working individuals with families and households to support. If the federal government through Indian Affairs abolished the reserve system and Indian Act, the entire "Indian Industry" complete with all who work in it, would cease to be employed. In other words, the impoverished Indians living in Third World conditions are essential to the existence the "Indian Industry".

Speakers invited to promote the Children's Services' point of view at the Provincial Round Table pre-meeting on May 6th, 2004

The government-sponsored male-bashing continues and intensifies... 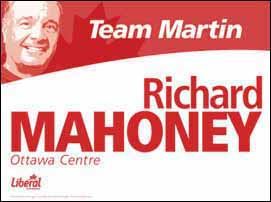 No official date for the elections has been announced as of now, but things are in full swing already. Even there not much honesty or fair play is to be expected.  Why not?
The Liberals have all of the power, for now; and why not hang on to it for as long as it can still be enjoyed?
At any rate, the lawn signs are done, but will they work out?

[Dr. Pelling's] appeal against the refusal of the Family Division to issue the counter-summons (see full story) was heard on 12 February 2004 and was successful. Mr Justice Coleridge allowed the Appeal and ordered that the summons be issued in the Family Division, not Queen's Bench, to be heard on Tuesday 6 April 2004 at 10:30 hrs. Further details of judge and court at the Royal Courts of Justice can be obtained from the Daily Cause List published on 5 April after 2pm at www.courtservice.gov.uk. The matter is expected be heard in open court: indeed if it isn't then Dr Pelling will not be taking part. Support welcome and needed on 6 April 2004.
Full Story

The Super-Family, the community of women envisioned and called for by Marx and Engels, is upon us

The government, after having done its best to destroy our families, now attempts to construct a government-run, -controlled and -funded substitute for our families, a super-family, a single one, the community of women envisioned and called for by Marx and Engels, with the State as the provider and protector for women and women's children.  Fathers will no longer be needed, except as serfs.
That'll never work well, but it will use taxpayers' money to attempt doing without love what families did for the pure love and joy of it and without charge. (Full Story)

Canada and its new prime minister, Paul Martin, fund and promote the implementation of global Earth worship.  Millions of taxpayers' money are being used for that.

Will Some Reservists' Homecoming Be a Jail Cell?

[As those in the Gulf War before them] many reservists and guardsmen currently serving abroad are facing the same problem. Their child support obligations are based on their civilian pay, which is generally higher than active duty pay. When called up they are sometimes obligated to pay an impossibly high percentage of their income in child support....

The child support snare faced by many reservists and guardsmen represents an avoidable and morally indefensible breach of faith with fathers who serve.....

This column first appeared in the Chicago Sun-Times (3/3/04).

Alberta Government persists in the commission of a hate crime against all men.

A government that spreads anti-male feminist propaganda commits violence by proxy, and there is no excuse for that.  Violence is a crime, and so is the promotion of hatred against an identifiable minority.

Certainly, the Alberta Government toned down the contents of its man-hating website for the FV Roundtable, but that appears to have been just a snow-job.  While the changes to the website were being made and in their final stage of completion just prior to uploading them, hard copies of a misandrist document, the unabridged version of the Regional Workshop Guide & Workbook, were being mailed out through the regular mail.

No matter by what means it is being promoted, hatred is still hatred, and to promote it against a minority is a crime. (See Details)

What good are men?

The latest guff from the BBC on the elimination of men, and, some light entertainment

Only in Your Sickest Dream, Sour Sister.

This is an article that the BBC Two asked George McAulay to write for a new program called "IF" that is to come out soon.

Much of the misandrist material has been removed — on or just prior to 2004 03 03, and the website now seems to be 'gender' balanced.  Is that a good reason to celebrate a victory?